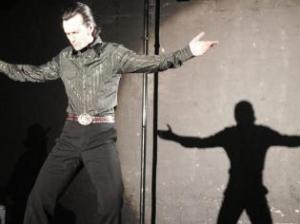 Cinema has a perverse hard on for portraying grueling descents into madness, but they’ve never been as maliciously evil as White Lightin (Madman), a white trash horror show masquerading as a biopic, offering the words ‘based on a true story,’ which in cinematic speak means ‘we made this shit up.’ Jesco White is a tap dancing hillbilly psychopath with a penchant for huffing (chroming) lighter fluid. He dances to keep the devil at bay, but Jesco has psychosis running through his veins, and even a puffy white trash Princess Leia (Carrie Fisher) as his older love interest can’t save this tortured butterfly. Filmed with an abundance of style and blessed with an amazing gothic backwoods soundtrack, it’s equally revolting and hysterical, dark, bleak and wrong.

Our next ‘true’ story is German lunatic Werner Herzog’s 1981 Invincible (Aztec), an English language film set in 1930’s Berlin during the ascension of the Nazi party. Herzog populates his film with non actors like a concert pianist, a Finish bodybuilder who was once the world’s strongest man, yet also Tim Roth as a malevolent and spooky stage clairvoyant and Fragmented Films favourite Udo Kier who fails to suppress his own innate malevolence and spookiness. It’s the folkloric tale of a Polish Jew who become a sensation in a blond wig as a symbol of Aryan strength. In Herzog’s hands strongman Jouka Ahola’s Schwartzeneggeresque performance reads as a kind of earthy holiness, whilst Roth is at his smarmy best. Although this typically bizarre Herzogian tale of confidence tricksters and doomed prophets twists and turns in some truly unexpected ways, it is a little, dare I say it, self indulgent – even for Herzog, a man who eats self indulgence for breakfast.

Next up cross your fingers, close your eyes and hope to hell it’s not true. In The Loop (Madman) is an hysterically funny potty mouth trawl through the back-rooms of UK and US political power brokers on the eve of war in the middle east and reveals, well, a bunch of naive incompetent self important fools. Forget weapons of mass destruction, it’s all about ego, as seemingly innocuous comments from a bumbling British MP create a domino effect that leads the world to the brink. It’s achingly painful, the Office with the savage bite of Dr Strangelove.

Blatant lies and laughingly inaccurate facts populate these desperately earnest tales of teenagers in the evil clutches of drug addiction in Hooked (Rocket). Perhaps the genius of this collection and also the second volume, which contains the infamous Reefer Madness, is that these educational films haven’t been re-mastered, there are blotches, the film and soundtrack skips, often to laughingly ridiculous results. They should be illegal themselves. Instead they just make you want to take drugs.

Finally we catch Bjork’s squeeze in Matthew Barney: No Restraint (Arthouse Films) where we see this polarising artist creating giant moulds of petroleum jelly on the deck of a Japanese whaling boat. Of course no one understands what the hell he’s doing but that’s nothing new, his art is dense and precocious. A highlight is Bjork discussing the sub bass symphony she composed for the work. 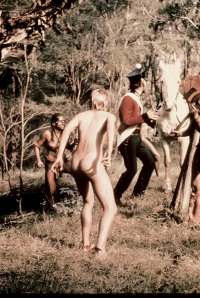 There’s something very wrong about a guy who gets his daughter to star in his latest film and then shoot a nude shower scene, adding a further layer of perv, to what is equal parts kitsch and creepy. We’re talking Italian horror maestro Dario Argento here, finalising his supernatural trilogy of Suspiria (1977) and Inferno (1980) with 2007’s Mother of Tears (DV1). Argento has always loved excess, overwhelming and confusing his audience with vivid colours, baroque imagery and insanely loud prog rock music. The plot in his hands is just a convenient way to connect the elaborately staged hyper gory murder scenes. It’s murder porn but it has style. Here the murders are crueler, more abrupt, the art in the gore, not the staging. With Asia Argento (Transylvania), Udo Kier (Suspiria) and a bunch of folks that look like they just stepped out of a Human League music video, it’s as insanely excessive as the other two, but somehow it doesn’t quite connect. That’s despite the joy of Claudio Simonetti‘s (Goblin) music and the opportunity to witness someone being strangled with their own intestines.

Sauna (Asylum), is heavy on the atmosphere, gorgeously shot, bleak and menacing. It’s set in 1595 after the bloody and brutal 25 year war between Finland and Russia. It begins with this awful sense of dread and doesn’t let up, following the weary battle scared warriors who have devoted their lives killing and defiling, now charged with marking the border between Russia and Sweden. In the middle of a swamp they find a mysterious uncharted village filled with the elderly and one solitary child. Nearby is an imposing concrete sauna that is said to wash away all your sins. The soldiers of course have more than a few they wish to offload. This is a grim kind of horror, about the weight of sin and the costs of redemption. It’s creepy, tense and scary as hell, the kind of horror that seeps into your consciousness until the narrative evaporates and all you’re left with is raw emotion.

Journey Among Women (Beyond) is Lord of the Flies with 70’s feminist ideals set in Australia’s convict past. In the generous extras director Tom Cowan speaks of taking 12 half naked inner city girls, including members of ghetto lesbian feminist rock band ‘clitoris,’ out into the bush and roughing it for 6 weeks, “there was almost a mutiny,” he explains calmly. And you can see this reversion to savagery on screen. It’s loose, heavily improvised and posses a dangerous feel, as a band of female convicts escape their shackles and create a utopian existence in the bush free from the abuse of men. It’s not entirely successful as a convict film thanks to the urban qualities of some of the girls , yet as a provocative (read heavy nudity and lesbian activity) study of power and gender issues in 1977 it’s a fascinating, not in the least because it manages to avoid the sexploitation tag, despite brimming with all the right ingredients.

When the hitchhiker beheads his driver, sews it back on and then sends the confused victim on his way, you realise that The Committee (Dark Horse) is a very strange film. This surreal murder is used as a catalyst to explore ideas of freedom of choice and bureaucracy as a means of maintaining control. By having the victim up and walking, the focus moves away from the violence of the act to the arrogant motivations behind it. Written by a professor of economics and with an obscure unreleased Pink Floyd score, this is provoking English intellectual surrealism from 1968.

The Land That Time Forgot (Madman) is a boys own adventure story from the writer of Tarzan, with hyper cheesy special effects of dodgy looking plastic dinosaurs, pink smoke and ludicrous plot developments. Yes the crap plot is a dodgy special effect. Put simply, former foes are forced to band together when they are marooned on a mystical island trapped in the past. They then decide to shoot everything. It was made in 1975. You can tell.

Sex Galaxy (Arkles) is a green movie, created solely with recycled footage from z-grade science fiction from the 60’s and re voiced with the maturity of a horny 14 year old schoolboy. At one point Billy gets attacked by a vaginasaur. “Talk about being pussy whipped quips one astronaut,” “does anyone have any yeast?” screams another, “you were lucky Billy 10 seconds longer and you would have been a human pap smear.” That’s one of the more intelligent exchanges in this proudly puerile film about a planet filled with female sex slaves who are protected by a jive talking Forbidden Planet robot pimp. It’s stupid and rude. You’ll love it.