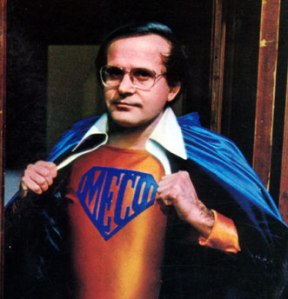 On the 25th of May 1977 a young man watched Star Wars on its opening day. He’d never seen anything like it.  Over that weekend he watched it four more times, even purchasing the soundtrack. For Domeneco Monardo, already a sucker for science fiction there was something special about this film, something magical. Yet when he got home and played John Williams now famous symphonic score something was wrong: The sound effects were missing.

“I wanted to hear the space ships, R2D2, the Light Sabers, the creatures sounds,” he would later tell interviewers.

Domeneco, or Meco as he liked to be known, wasn’t your typical acne scarred, geeky, living at home Star Wars fanatic. An accomplished trombonist, in the 50’s while still at school he’d formed a jazz trio with future legends Ron Carter and Chuck Mangione.  Since the mid 60’s he’d been a session musician and in the early 70’s started a production company with Tony Bongiovi (the second cousin of Jon Bon Jovi and producer of Jimi Hendrix, The Ramones, Talking Heads etc) and Harold Wheeler. Disco Corporation of America (or DCA) worked with numerous artists including Neil Diamond, but they really cemented their reputation with the burgeoning popularity of disco -most notably arranging co producing Gloria Gaynor’s classic Never Say Goodbye album.

So it was clear to Meco what John Williams score needed: the sweat and the swagger of disco. Star Wars & Other Galactic Funk by Meco is a deep funky disco monster with laser beams and light sabers bouncing around madly, and a relentless beat chugging along under John Williams triumphant score. To get the sounds of R2D2 Bongiovi toiled for 8 hours on now ancient synths but the efforts were worth it. It’s totally nuts. The b-side is perhaps even more remarkable. Concerned that they didn’t have enough material, Meco went for a walk in Central Park and heard some school kids playing drums. He rushed them into the studio the next day, wrote some melodies over the top, and voila, side B.

The record was huge; it sold 4 million copies and went to number one on Australia and the US. Bongiovi would use his first royalty check to build the legendary Power Station recording studios. And Meco? Well he kept going, a disco Midas transforming everything he could find into disco. John Williams copped the brunt of it, not only funking up the remaining Star Wars trilogy, but also Superman and Close Encounters of the Third Kind.

“Meco took things another step by bringing Star Wars to a vast audience who otherwise would not have heard it in its original symphonic setting,” offered John Williams in the liner notes of Meco’s Superman & Other Galactic Heroes, being careful not to give his take on the quality of the music. Later during Phantom Menace Williams would exercise a clause in his contract preventing Meco from discoing up his score.

Meco’s crowning glory, aside from coproducing Kenny G’s first album and giving a young Jon Bon Jovi his first professional vocal on ‘R2D2 – We Wish you a Merry Christmas,’ is 1978’s The Wizard of Oz. It’s a darker slightly schitzo disco take, perhaps more menacing due to the strange vocals over the typically symphonic score and relentless disco shuffle. Ding Dong the Witch is Dead is particularly terrifying, with a shrieking witch and sped up munchkins. You don’t know whether to dance or hide whimpering in the corner.

In 1985 with dwindling sales and increasingly tokenistic albums, Meco left the music business behind to become, wait for it, a real estate broker in San Antonio. Yet as recent as 2008, at the age of 69 he was promising more Star Wars soundtracks and collaborations with Diana Ross and Brittany Spears. Yet not only have these not eventuated, but Meco himself has disappeared again, so it’s possible that he’s ultimately decided his talents lie best with selling houses, or John Williams has finally had him taken out.