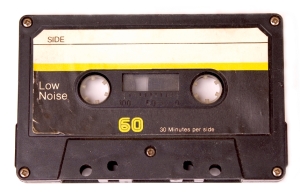 In 1964 Phillips unveiled the compact cassette. Small and inexpensive to manufacture, it heralded the future of music. Though it didn’t really take off until the 80’s where in conjunction with the Sony Walkman (the ipod of the 80’s), cassettes began to outsell vinyl. Suddenly music was portable and for the first time you were the DJ in the soundtrack to your life. By the late 80’s the public had embraced the format. It entered our consciousness. Even an old geezer like Cliff Richard could become the height of 80’s cool because he was gliding along on roller skates, ‘wired for sound’ bopping along to his Walkman with a ‘head full of music.’

But alas it wasn’t to last. When cds were unleashed onto the market into the mid 90’s, with a propaganda campaign that would make the US military machine blush, cassettes never stood a chance. The introduction of the compact disc offered the mobility of cassettes with the promise of a perfect sound quality even greater than that of vinyl. In short it exposed the flaws of cassette, namely that speed could vary dramatically between playback devices, it increased noise levels and deteriorated in quality over time. Everyone replaced their music collections with the newfangled cds and record companies halted cassette productions.

But this is not the end of this story. Because the format wars didn’t end. In fact they never end. Whilst DJing culture has developed a fetish item out of vinyl and crate diggers scour entire continents in search of exotic rare groove, cassettes have been unable to elicit the same kind of devotion. The problem is that no one wants to DJ with tapes. They’re too fiddly to splice and the quality issues and deterioration make them unattractive formats to store music. Whilst they lasted longest in car stereos, even this was destined to end, replaced with compact discs or now Bluetooth. Even op shops can’t sell cassettes anymore. The problem is that few people can play them. Even if they still own a cassette player the chances are that it’s heads are probably so dried and decayed that all you’ll hear is the rusty squeal of a format where the love affair has well and truly ended. With blank cds so cheap and every garage band using garage band and able to manufacture their own music, cassettes seemed destined to the scrap heap.

But then mp3’s happened. An endless supply of free music up for grabs on the net, all of which served to devalue music as a commodity. Music became simply files to be traded, and people longed nostalgically for an artefact. Something to make the music special again. Simultaneously the cassette became a signifier of cool. Something about its obsolescence appealing to designers and musicians alike, appearing as art on t-shirts, cd covers, purses, pencil cases. You name it.

For musicians vinyl is too expensive. Cd’s are too ubiquitous, and mp3’s are too ethereal. That leaves cassettes. Not only is there something subversive about using a doomed format, but there’s also a rich history of cassette culture particular amongst the DIY punk culture in the 80’s to tap into. Of course there’s also our own nostalgia, of the mix tapes we created over the years. Then of course the sustainability factor, of rescuing our cassette players from the landfill. But ultimately there’s something else. It’s the distinctive qualities that cassette offers, the warm noisy tape hiss that often serves to flatten out some of the more difficult frequencies, making it more of an aesthetic decision. Then of course on cassette music is never finished. As the tape deteriorates the noise floor raises and the music slips unstably into the background, evolving subtly with each listen.

And with record companies desperately trying to distinguish themselves in a rapidly shrinking marketplace, all these factors become increasingly significant. Which may explain why a number of indie and experimental labels have recently begun issuing limited edition tape releases (often in conjunction with a free download). Niche labels like Touch have began issuing the odd cassette releases, whilst artists like Deerhunter, Animal Collective, Oneida, and Bj Nilsen have all offered up limited edition cassette offerings.

“We’re done with cd’s like all smart people,” offers Brisbane based improviser Joel Stern in discussing his latest project Sky Needle, a four piece conceptual rock group that draws heavily on the punk/ new wave of the mid 80’s. “We dubbed the tracks down onto cassette and somehow it sounded better. And lots of my favourite releases of recent times are on cassette.” So like it or not, the cassette has returned from the dead. And in its second coming it’s perhaps less about playing and more about stroking. 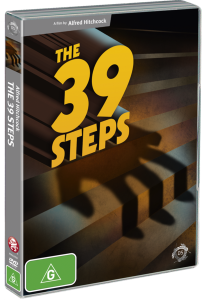 Released in 1935 The 39 Steps is one of Alfred Hitchcock’s pre Hollywood films and dripping with clichés. A mysterious woman who claims to be a spy befriends our charming Carry Grant style hero before being promptly murdered in our bachelor’s flat. Here a sense of patriotic duty conspires with boys own adventure that sees him fleeing from both the law and ruthless international spies in an attempt to save mother England. He finds himself meeting mysterious strangers on the Scottish moors, chained to a pretty blond who detests him and attempting to unravel an international conspiracy.

Yes it’s clichéd, but these clichés had to start somewhere. And regardless it’s an enjoyable romp. Hitchcock cares little for the national identity of the spies, or even the secret that people are willing to kill to protect. These are merely examples of his infamous Macguffin’s. Instead many of his usual themes appear, the dashing everyman hero, an innocent man wrongly accused attempting to clear his name, and of course a romance that takes time to develop. Hitchcock’s 18th film is a clever suspense laden spy drama which demonstrates enough of the auteur’s trademark style and wit to not only be enjoyable some 76 years on, but also makes it clear why Hollywood would soon come calling.

Extra Features:
An audio commentary from academic Wendy Haslem, who digs through the film, discussing sound, editing techniques, the role of women and dysfunctional families. There’s also a retrospective episode of On location that traces where The 39 steps was filmed and the stories behind it, as well as a radio play of the film.